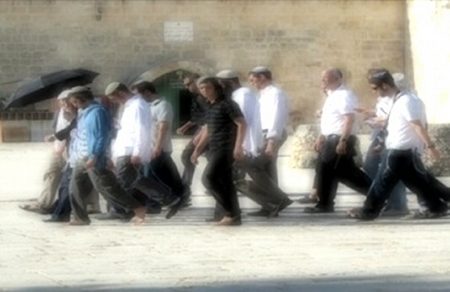 Israeli settlers, on Sunday, broke into Kifl Haris town, to the north of the West Bank district of Salfit, and proceeded to desecrate Islamic shrines there.

Witnesses said, according to WAFA correspondence, that a large number of settlers broke into the town in the predawn hours, and proceeded to ‘intentionally provoke’ the town’s locals by performing religious rituals on the Islamic sites.

Israeli military soldiers reportedly provided the settlers with protection and secured their entrance and exit out of the town, causing a state of tension among the town’s locals.

Head of Kafl Hares municipality, Abdel-Rahim Bothyeh, said the religious sites there are constantly subjected to destruction and desecration by settlers; settlers have previously set fire to the sites.

According to POICA, “Religious sites of Kifl Haris town, north Salfit governorate are considered the living example of area’s long history. The town accommodates three religious shrines namely (Thu Al-Kifl, Thu Al-Noon, and shrine of Joshua). This is how the area acquired religious importance throughout the eras.”

The village of Kifl Haris witnessed, on May 05, 2016, an attack carried out by colonists, who broke into the area in buses and sabotaged the shrine of Thu Al-Kifl.

At time of the attack, colonists print sprayed hateful slogans calling to “kill all Arabs” and ” revenge”.

Kifl Haris is surrounded by the villages of  Deir Istiya, Zeita, Jamma’in and Haris. With a total area of 9,254 dunams, of which 786 dunams is the village’s a, Kifl Haris is inhabited by 3,248 people.

Israeli occupation forces razed 278 dunams of Kifl Haris lands for the construction of the Ariel colony, where American restaurant chain McDonald’s recently refused to open a branch in the settlement, in a move that swiftly prompted calls from settler organisations for a boycott of its restaurants.