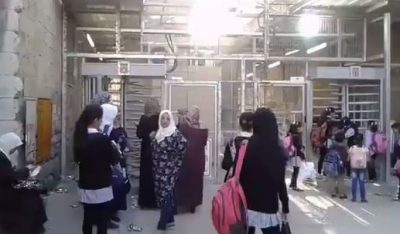 Israeli soldiers have kidnapped, earlier on Tuesday at dawn, two young Palestinian men in the West Bank districts of Jerusalem and Ramallah. The army also prevented dozens of schoolchildren from crossing a roadblock in Hebron while on their way to school.

Also in the Ramallah district, the soldiers searched many homes, and summoned several Palestinians for interrogation.

The PPS added that the soldiers also invaded homes in Jerusalem’s Old City, and kidnapped one Palestinian, identified as Mahmoud Najeeb.

In Hebron, in the southern part of the West Bank, the soldiers kept the roadblock in the Zawiya neighborhood closed for the third consecutive day, and prevented the residents, including schoolchildren, from crossing.

The army decided to close the roadblock, and placed many areas in the West Bank under strict closure during the Jewish New Year (October 2nd – October 4th).