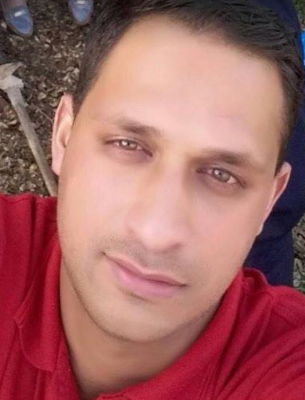 Israeli soldiers shot and killed, on Tuesday afternoon, a young Palestinian man who reportedly deliberately rammed Israeli soldiers with his car at Beit ‘Anoun junction, east of Hebron, in the southern part of the occupied West Bank.

The Palestinian has been identified as Ra’fat Nathmi Harbawi, 29, from Hebron city. Israeli sources said two soldiers were mildly wounded.

Eyewitnesses said the soldiers fired a barrage of live rounds on the Palestinian car,  before dozens of soldiers rushed to the scene and closed the area.

Palestinian Red Crescent medics tried to reach the Palestinian, but the soldiers prevented them from approaching his vehicle; he was declared dead shortly after he was shot.

The Israeli army later invaded the home of the slain Palestinian,  and summoned his brother Mohammad for interrogation at Etzion military base, north of Hebron.

The soldiers also attacked many Palestinians, including reporters, who gathered near the Palestinian’s home, and deleted videos and pictures captured by them, documenting the invasion, in addition to interrogating reporters and family members for more than 90 minutes.