Army Kills One Palestinian, Seriously Injures Another, In Hebron 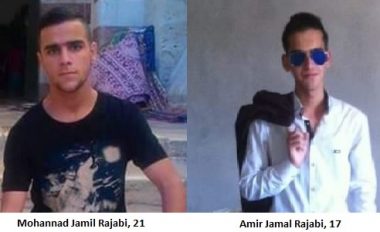 Update: Israeli soldiers shot and killed, Monday, two Palestinians near the Ibrahimi mosque,  in Hebron city, in the southern part of the occupied West Bank.

The Palestinian Health Ministry has reported that the two Palestinians have been identified as Mohannad Jamil Rajabi, 21, and his cousin Amir Jamal Rajabi, 17.

One of them was instantly killed, while the other died at an Israeli hospital approximately three hours later.

Sep 19, 2016 @ 15:05 Israeli soldiers shot and killed, on Monday afternoon, a young Palestinian man, and seriously wounded another, near the Ibrahimi Mosque, in the southern West Bank city of Hebron, allegedly after attempting to stab soldiers.

Update: After his death, Israeli fanatics started placing pork on his face while the soldiers were carrying him in a stretcher and taking him away.

The soldiers did not stop them, or try to remove them from the area.

Israeli sources said the two young men tried to approach a military roadblock, near the Ibrahimi Mosque, “with the intent to stab soldiers,” but the soldiers noticed them and opened fire, killing one and inflicting serious wounds on another.

The sources added that no soldiers were harmed in the reported attempted stabbing incident.

The army deployed dozens of additional soldiers in the area, and closed all entrances leading to the Ibrahimi Mosque, after declaring the area a closed military zone.

So far, the names of the slain Palestinian and the wounded have not been released, but initial reports indicate they are 17 and 20 years of age.

Clashes took place after the shooting, especially near Abu ar-Reesh military roadblock, at the southern entrance of the Old City of Hebron, and near the Ibrahimi mosque.

The soldiers fired several gas bombs causing many Palestinians, including schoolchildren, to suffer the effects of teargas inhalation.

Israeli media sources initially said two Palestinians were killed in the incident, but later confirmed the death of one Palestinian, and the serious injury of the other.

On Monday at dawn and Sunday evening, Israeli soldiers have kidnapped at least 25 Palestinians, including several children, in different parts of the occupied West Bank, the Palestinian Prisoners Society (PPS) has reported.