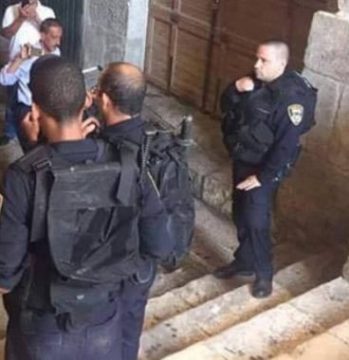 Israeli soldiers have kidnapped, on Monday at dawn and Sunday evening, at least 25 Palestinians, including several children, in different parts of the occupied West Bank, the Palestinian Prisoners Society (PPS) has reported.

The Jenin office of the PPS, in the northern part of the occupied West Bank, said the soldiers kidnapped six Palestinians, including three children, in the district.

In Bethlehem, the soldiers kidnapped four Palestinians, identified as Hasanen Hasan Shouka, 57, a father of two detainees, in addition to former political prisoner Mohannad Jabr, Adalah Khader Ta’mari, 52, and her son Ayatollah Shouka, 19, after invading their homes and searching them.

It is worth mentioning that Adalah is the widow of Mohammad Shehada, who was assassinated by the army along with three other Palestinians on March 12, 2008.

In Hebron district, in the southern part of the West Bank, the soldiers invaded and searched many homes, and kidnapped four Palestinians identified as Fayez Ibrahim Zeidat, 34, Ali Mahmoud Zeidat, 32, Abdullah Shahin, and a former political prisoner, identified as Akram Fseesy, 34.

One of the invaded homes belongs to the family of Omar Arafat Za’aqeeq, 19, who was killed by the army on November 27, 2015.

The kidnapped have been identified as Hamza Adeeb Khalaf, 25, from Kufur Abboush town, near Tulkarem, in addition to Ahmad Taleb Makkawi, 19, from Balata refugee camp, in Nablus, and Omar Emad Reehan, 19, from Tal village, south of Nablus, and a young woman, identified as Ghada Awwad, 22.

In Salfit, in central West Bank, the soldiers kidnapped one Palestinian, identified as Ayman Aziz Jabr, 47.

In occupied Jerusalem, the soldiers kidnapped Rashad Eskafi and Ayman al-Kurd, who was shot and injured prior to his arrest allegedly after he stabbed soldiers.