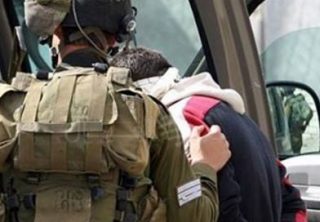 Updated: Israeli soldiers invaded, on Monday at dawn, Beit Ummar and Ethna towns, in the southern West Bank district of Hebron, searched homes and kidnapped four Palestinians. One of the invaded homes belongs to the family of a teen who was killed by the army on November 27, 2015.

The soldiers also invaded a home in Ethna town, west of Hebron, and kidnapped one Palestinian, identified as Akram Yousef al-Fseesy, 28.

In addition, the soldiers invaded the center of Beit Ummar town, north of Hebron, and the Tarbeeqa area, before breaking into the home of Mohammad Awad, the media spokesperson of the Popular Committee in the town, and forced him and his family out of their property.

The soldiers then read a printed order informing the media coordinator that he “should not interact with the settlers and the soldiers,” especially in the Hebron-Jerusalem road area, and threatened to arrest him, and impose high fines on him.

In addition, the soldiers invaded the home of Issa Za’aqeeq, the father of Omar, 18, who was killed by the army on Friday November 27, 2016, and confiscated Palestinian flags and posters of his slain son.

The army also invaded the homes of Mohammad Issa Za’aqeeq and Hisham Khalil Abu Mariyya, and violently searched them, in addition to handing them leaflets threatening harsh measures and punishment to all residents of Beit Ummar, should local youths “continue to attack Israeli military vehicles and settlers’ cars.”

While withdrawing from the town, many local youths hurled stones and empty bottles on the invading military vehicles, while the soldiers fired concussion grenades and gas bombs.