Israeli Army Kidnaps Four Palestinians, Including A Woman And Her Son, In Bethlehem 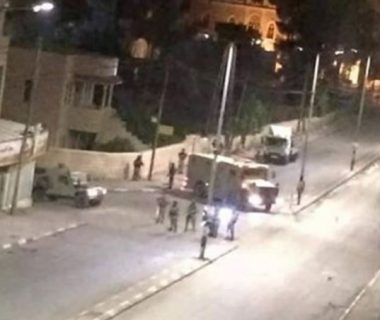 Several Israeli military vehicles invaded, on Monday at dawn, the West Bank city of Bethlehem, searched a few homes in Wad Ma’ali area, in the center of the city, and kidnapped four Palestinians, including a woman and her son. The soldiers also invaded the al-Khader town, south of Bethlehem.

The soldiers kidnapped Adalah Ibrahim Ta’mari, 50, the widow of Mohammad Shehada. who was assassinated by the army along with three other Palestinians on March 12, 2008, and her son Ayatollah, 19, after invading their homes and searching them.

Another Palestinian, identified as Hasanen Hasan Shouka, 57, from his home in Bethlehem.

The soldiers also invaded the family home of Mohannad Jaber, 20, and kidnapped him, after searching the property, causing excessive damage.

In related news, the soldiers invaded the al-Baloa’ area, in the al-Khader town south of Bethlehem, before breaking into and searching the homes of Abdullah Hussein Issa and Yousef Mohammad Sbeih.

One of the invaded homes belongs to the family of Omar Arafat Za’aqeeq, 19, who was killed by the army on November 27, 2015.