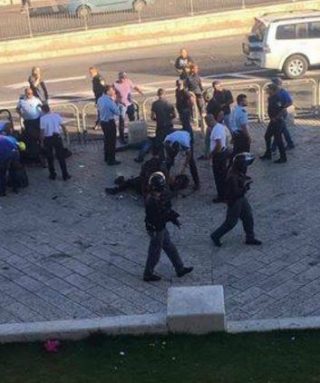 According to Israeli sources, that two police officers suffered very serious wounds, one Monday morning,  a young Palestinian man stabbed them, in the Sahera Gate area, in occupied East Jerusalem, and that the attacker was also shot and injured.

Update: — The army summoned two of Ayman’s brothers for interrogation, and kidnapped them. They have been identified as Ammar, 23, and Ala, 25.

The family said the wounded son was moved to surgery at an Israeli hospital, and that they were not provided with any further information about his health condition. —

Israeli daily Haaretz quoted the police stating that the Palestinian reportedly came from the direction of the Damascus Gate area, and walked behind two officers before stabbing them several times.

Israeli medics of the Magen David Adom rushed to the scene and treated the injured officers before moving them to Shaare Zedek Medical Center, suffering serious stab wounds to their upper bodies.

Haaretz stated that one of the wounded is a female officer, in her twenties, while the other is male officer, 45 years of age. The Palestinian, identified as Ayman al-Kurd, 20, was shot and seriously injured by other officers in the area, and remained bleeding on the ground for an extended period without any medical attention, the Maan News Agency said.

Al-Kurd is from Ras al-Amoud neighborhood in Silwan town, south of the Al-Aqsa Mosque, in Jerusalem.

Maan added that the army completely sealed the Old City, and forced school students to return to their homes.

Following the incident, the soldiers forced all store owners, especially in Salaheddin Street, Sultan Suleiman Street and Ar-Rasheed Street, to shut them down.