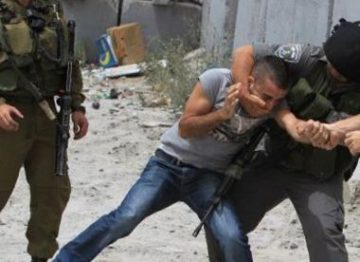 Israeli soldiers invaded, on Sunday evening, the Aqabat Jaber refugee camp, southwest of Jericho city, in the occupied West Bank, kidnapped a child, and took him to a detention and interrogation center, near Jerusalem. The army also invaded Marda village, near Salfit.

The WAFA Palestinian News Agency has reported that the soldiers kidnapped Mohammad Ahmad Maharma, 13, after stopping him at the southern entrance of Jericho.

WAFA added that the soldiers cuffed and blindfolded the kidnapped child, and moved him to a military and interrogation center, in Ma’ale Adumim colony, near occupied Jerusalem.

Owners of some of the invaded homes have been identified as Ayyoub Suleiman, Wasfi Suleiman and Ahmad Najeh Khuffash.

Also on Sunday evening, the soldiers invaded Zabbouba village, northwest of Jenin in the northern part of the occupied West Bank, and kidnapped four Palestinians, including two children.