Army Kills One Teen, Injures Three Others, Near Ramallah 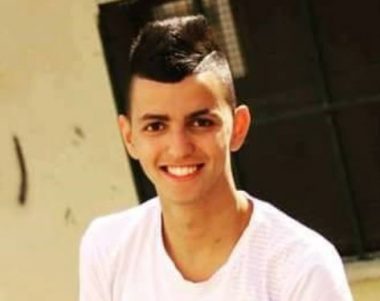 Israeli soldiers killed, on Thursday evening, a Palestinian teen, 17 years of age, and seriously wounded three others, after opening fire at their car near the al-Jalazoun refugee camp, north of Ramallah, in central West Bank.

Palestinian medical sources in Ramallah said the slain teen, Mohammad Mahmoud Hattab, 17, his parent’s only child, was shot with live rounds in his chest and shoulder, and was rushed to a hospital where he died from his serious wounds. Eyewitnesses said the shots were fired by Israeli soldiers on a tower, one of many surrounding Beit El colony, where the “Civil Administration” which runs the military occupation of the Palestinian territory, is located.

The Israeli army claimed that the soldiers opened fire at a Palestinian car, after the passengers hurled Molotov cocktails on the military tower.

Following the teen’s death, and the serious injuries of the three others, clashes took place between many local youngsters, who hurled stones and Molotov cocktails at the soldiers who fired live rounds, gas bombs, concussion grenades and rubber-coated steel bullets.