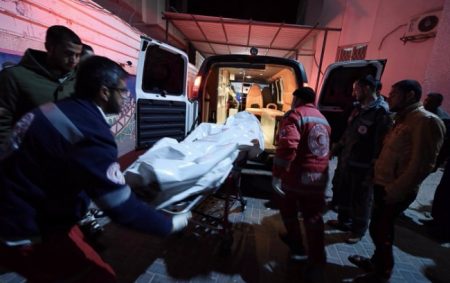 Israeli forces continued with systematic crimes in the occupied Palestinian territory (oPt) for the week of 16-22, March 2017.

During the reporting period, Israeli forces killed two Palestinian children and wounded 3 others, including a child, in the West Bank and Gaza Strip.  Meanwhile, they wounded two Israeli activists in the West Bank.  In the Gaza Strip, Israeli forces continued to chase Palestinian fishermen in the sea and open fire at the farmers in the border areas.  Moreover, the Israeli warplanes carried out many airstrikes against training sites belonging to the Palestinian armed groups.

In the West Bank, in a new crime of using excessive force, on 17 March 2017, Israeli forces stationed at the entrance to al-‘Aroub refugee camp, north of Hebron, a Palestinian child and seriously wounded another.  The shooting occurred from a distance of 10 meters after two boys threw two Molotov Cocktails at an Israeli military vehicle stationed near the Israeli watchtower established at the entrance to the camp. The Israeli soldiers opened fire at the Palestinian civilians who hurried to rescue the two children in order to hinder saving their lives.

On the same day, Israeli forces wounded a Palestinian civilian when they raided Sebastia village, northwest of Nablus, so a number of Palestinian children and youngsters gathered to throw stones at the Israeli vehicles.

On the same day as well, two Israeli activists were wounded while participating in Kafr Qaddoum weekly protest, northeast of Qalqilya.

In the Gaza Strip, in a new crime of excessive use of force, on 22 March 2017, Israeli forces killed a Palestinian civilian and seriously wounded a young man after firing artillery shells at them when both civilians were near the border fence with Israel in al-Shokah village, east of Rafah City.  PCHR’s investigations emphasized that the shelling incident violates the principle of necessity and distinction, the use of force was excessive, especially the victims were only civilians and unarmed.

In the context of airstrikes, on 16 March 2017, Israeli warplanes carried out 2 airstrikes against two training sites belonging to the Palestinian armed groups, north and west of the Gaza Strip.  As a result, the two sites sustained damages.  The airstrikes caused strong explosions that rocked the area, so civilians, especially women and children, were terrified.  However, no casualties were reported.

In the context of targeting border areas, On 18 March 2017, Israeli forces stationed along the border fence between the Gaza Strip an Israel, fired an artillery shell at a vacant land, north of Beit Lahia in the northern Gaza Strip.  As a result, 4 sheep grazing in the area were killed.

On the same day, Israeli forces stationed along the border fence, east of Khan Younis in the southern Gaza Strip, opened fire at agricultural lands in the villages of Khuza’ah and ‘Abasan.  No casualties were reported.

On 19 March 2017, Israeli forces stationed along the border fence opened fire at agricultural lands in al-Shokah village, east of Rafah City in the southern Gaza Strip.  No casualties were reported.

In the context of targeting Palestinian fishermen in the sea, On 17 March 2017, Israeli gunboats stationed off Rafah shore opened fire at the Palestinian fishing boat sailing there.  However, no casualties were reported.

On 22 March 2017, Israeli gunboats stationed offshore, northwest of Beit Lahia village in the northern Gaza Strip, sporadically opened fire at Palestinian fishing boats and chased them. However, neither casualties nor material damages were reported.

During the reporting period, Israeli forces conducted at least 70 military incursions into Palestinian communities in the West Bank and limited on into the Gaza Strip. During these incursions, Israeli forces arrested at least 58 Palestinian civilians, including 8 children. Five of them, including 3 children, were arrested in occupied Jerusalem. Among those arrested was a Member representing Hamas in the Palestinian Legislative Council (PLC) identified as Mohammed al-Tol (60).

On 22 March 2017, Israeli forces moved into al-Mukaber Mount village, southeast of occupied Jerusalem, and stationed in al-Qunbor neighborhood.  They surrounded a house belonging to the family of Fadi Qunbor, and then a cement mixing truck arrived and poured cement inside the house.  The 2-stroey house used to shelter his wife and 4 children.  It should be mentioned that Israeli forces killed the aforementioned civilian on 08 January 2017 when he ran over a number of soldiers in a bus station near “Armon HaNetziv” settlement, which is established on the above-mentioned village lands.  As a result, a number of the soldiers were killed while the Israeli authorities so far keep al-Qunbor’s body in custody and refuse to hand it for burial.

In the context of house demolitions, on 11 March 2017, the Israeli Municipality demolished two barracks for horses and livestock belonging to Ayoub Shkeirat and Bassam Shkeirat in the village of Al-Mukaber Mount under the pretext of building without a permit.

Settlement Activities and settlers’ attacks against Palestinian civilians and their property:

In the context of Israeli settlers’ attacks against Palestinian civilians and their property, on 16 March 2017, Israeli settlers from “Yitsihar” settlement and under the Israeli forces’ protection attacked Burin Secondary School, south of Burin village, south of Nablus village, and threw stones at the school outside walls and iron fence.

On 17 March 2017, Israeli settlers uprooted 75 olive seedlings from a land belonging to Haitham Abu Kafanah in al-Wad area in the north-western side of al-Sawiyah village, south of Nablus.

On 18 March 2017, Israeli settlers from “Kiryat Arba” settlement, east of Hebron, threw stones at a vehicle belonging to ‘Aref Jaber (48) from Jaber neighbourhood.  As a result, the car’s windscreen was broken.

The Israeli forces previously took punitive measures. In a dangerous precedent, on Tuesday, 10 January 2017, the family of Fadi al-Qunbar received orders to suspend their residencies (withdrawing the blue IDs), in addition to cancelling family reunion applications of other relatives following the run-over attack carried out by Fadi in “Armon Hanatziv” settlement. Fadi’s family said to PCHR’s fieldworker that Israeli forces raided Fadi’s family house and handed them 12 orders issued by the Israeli Interior Minister to suspend the residency and reunion applications of several family members, The people who received such orders are: