Israeli soldiers continued, on Sunday at dawn, the firing of dozens of missiles and shells, into many areas in the besieged and impoverished Gaza Strip, including the center of the al-Boreij refugee camp, in central Gaza, killing two Palestinians. One Israeli was killed by shrapnel from a Palestinian shell.

The Palestinian Health Ministry in Gaza has reported that the soldiers killed Mahmoud Sobhi Issa, 26, and Fawzi Abdul-Halim Bawadi, 24, in the al-Boreij refugee camp. Both are members of the al-Quds Brigades, the armed wing of the Islamic Jihad.

The army also fired missiles at a home, owned by members of Zo’rob family, in Rafah, in the southern part of the Gaza Strip, and leveled it.

Media sources in Gaza said the Israeli army carried out more than 150 air strikes, in addition to firing dozens of artillery shells against 220 civilian structures in the Gaza Strip, including residential buildings, mosques, stores, educational facilities, media agencies and workshops.

The number of apartment buildings that were targeted by Israeli missiles has arrived to seven, in several parts of the Gaza Strip, in addition to the al-Mustafa Mosque in the Shati’ refugee camp.

The soldiers also fired missiles targeting 22 agricultural lands and hothouses, near the al-Azhar University and the Islamic University, and caused serious damage to several schools.

Furthermore, the army fired a missile at a motorcycle in the al-Falouja area, in northern Gaza, wounding two Palestinians, including one who suffered a life-threatening injury.

At least two Palestinians were also injured after the army fired missiles into an area east of Gaza City.

By the time of this report, at least fifty Palestinians, including children, have been injured by Israeli missiles and shells.

On Saturday at night, one Israeli man, identified as Moshe Adadi, 58, was killed by shrapnel from a shell fired from Gaza.

He initially suffered serious shrapnel wounds in the stomach and chest, and died from his wounds at Barzilai Hospital.

Israeli sources said he was as a rocket hit his home in Ashkelon on Saturday night, and died on his way to hospital.

Three other Israelis were injured, including an elderly woman, 80, who suffered severe wounds from shrapnel.

He initially suffered serious wounds in the stomach and chest, and died from his wounds at a Barzilai Hospital.

Three other Israelis were injured, including an elderly woman, 80, who suffered severe wounds from shrapnel.

According to the Israeli army, around 400 shells were fired from Gaza in a number of areas in the southern and central parts of the country, while dozens of them were intercepted by the Iron Dome system.

On Saturday, the Israeli army killed a pregnant Palestinian mother, identified as Falasteen Saleh Abu Arar, 37, and her baby girl, Saba Mahmoud Abu Arar, 14 months, after firing a missile at their home in Gaza city. The Israeli military claimed in a statement that they blame Hamas for the deaths of the mother and child, claiming an errant rocket was to blame, eyewitnesses contradicted that claim, saying that the mother and child were killed by an Israeli missile.

Among the targeted buildings was “Abdullah al-Hourani Center for Studies and Documentation” which is run by Palestine Liberation Organization (PLO), located in a residential building in Gaza city. 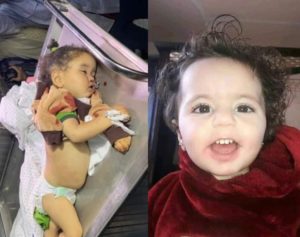 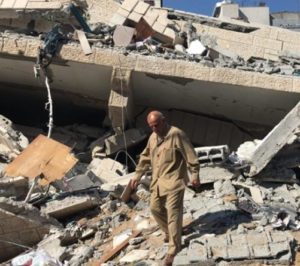 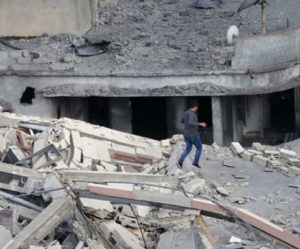 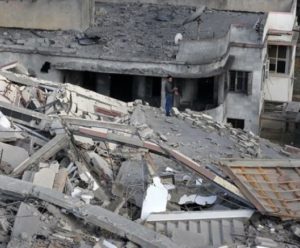