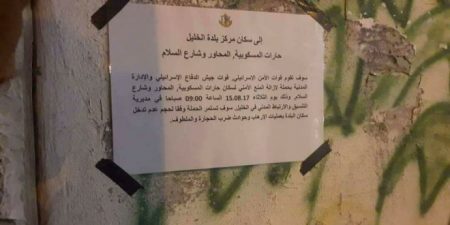 Israeli forces, on Sunday, informed locals from three Hebron neighborhoods that they would remove the security restrictions if they “behave”, via leaflets distributed in the area.

Conditions, according to the leaflets, will depend on “the population’s non-interference in terrorist operations and stone and Molotov throwing incidents.”

PNN further reports that the restrictions included barring residents from work in Israel or obtaining permits to enter Israel for work, trade or any other activity.

The army is reportdely going to start on Tuesday morning, gradually removing “security restrictions” placed on residents of three areas, which are: Al-Mascobia, Al-Mahawer and Al-Salam Street, located in the southern West Bank city.