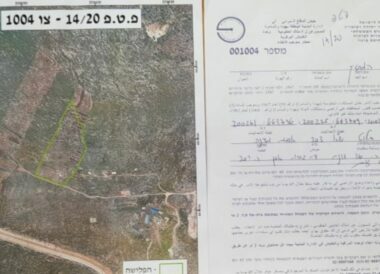 Several Israeli army jeeps invaded, on Wednesday morning, Palestinian lands in Deir Ballout town, west of the central West Bank city of Salfit, and handed many residents military orders to stop planting and rehabilitating their olive orchards, in addition to informing them that their existing olive trees will be uprooted.

Yahia Mustafa, the mayor of Deir Ballout, stated that the soldiers handed the orders to nine Palestinians whose lands are in the western area of the town, close to the illegal Annexation Wall.

The privately-owned Palestinian lands are in Area C of the occupied West Bank, under Israeli control, and are in Ta’mar and al-Barriyyat areas.

Yahia stated that the Palestinians planted olive trees on their lands five to ten years ago, and are trying to rehabilitate other sections of their lands to plant more trees.

He added that the local council in Deir Ballout asked the landowners to bring their deeds and legal documents in preparation for filing appeals against the illegal Israeli orders, in addition to submitting them to legal and human rights groups.

Resident Met’eb Mousa, one of the owners of the lands, said he and his brothers own 250 Dunams (61.7 Acres) of olive orchards, containing at least 2500 olive trees, and added that most of the trees were planted dozens of years ago, and many were planted seven years ago.

“We are constantly working on our lands, planting and rehabilitating them,” he said, “But now Israel wants us not only to stop the work, and return the orchards to their original condition before we started reclamation and rehabilitation of our lands.”

Earlier Wednesday, several fanatic illegal Israeli colonists invaded Palestinian orchards near Salfit, and uprooted many olive trees and saplings, in addition to stopping the residents from preparing for a dirt road leading to their orchards.