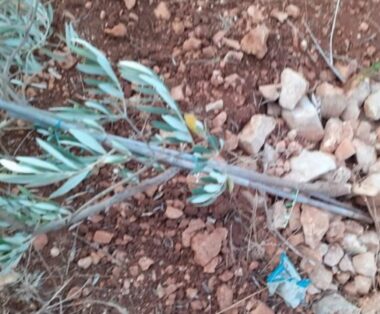 Several fanatic illegal Israeli colonists invaded, earlier Wednesday, Palestinian orchards near the central West Bank city of Salfit, and uprooted many olive trees and saplings, in addition to stopping the residents from preparing for a dirt road leading to their orchards.

Resident Zaher Taha stated that the Israeli assailants came from the illegal Bruchin colony, and uprooted more than 15 olive trees, which were planted four to six years ago in the northern area of Kafr ed-Deek town.

Taha added that the colonists also cut electricity wires providing power to an agricultural room in the same area.

“The invaded orchards are about 5 Dunams and contain dozens of olive trees, including trees which were planted many years ago, and around twenty, which were planted two years ago,” Taha stated, “However, and due to the proximity to the illegal Bruchin colony, they are subject to constant violations.”

He also said that, in the year 2011, Israeli soldiers demolished an ancient water well, in addition to destroying a room used by the farmers.

In addition, the colonists stopped the Palestinians from preparing for a road leading to their lands and threatened to assault a driver and confiscate his bulldozer if they return.

“No matter what they do, I will replant my orchards; I will continue to do what my forefathers always did,” Taha said, “They will continue to attack us, uproot our trees and demolish our property, but we will continue  to plant and build; we will remain steadfast on our lands.”