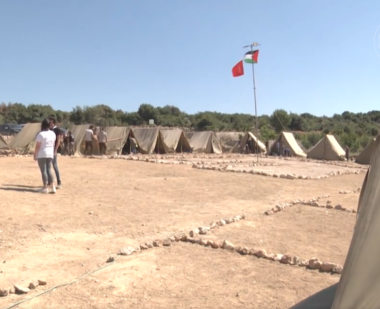 Israeli soldiers invaded, Saturday, a scout summer camp for the Arab Christian Orthodox Church in Beit Jala city, west of Bethlehem, south of occupied Jerusalem in the West Bank, and ordered the removal of the Palestinian flag and a mobile home.

Khaled Qassis, the scouts leader, said a large military force invaded the al-Makhrour area, west of Beit Jala, where the scouts are camping and ordered them to remove the Palestinian flag and a mobile home which is used as a kitchen and for storing food.

Qassis added that the soldiers informed them that the flag and the mobile home are “bothering” a colonialist settler who is illegally squatting on Palestinian lands nearby.

Qassis said that the scouts camp was set up Friday, and is attended that 140 scouts, both boys, and girls around the age of 13.

It is worth mentioning that the al-Makhrour area witnesses repeated Israeli invasions, and violations by the soldiers and the illegal colonialist settlers, including the bulldozing and uprooting of farmlands, the illegal annexation of the lands, and the demolition of a restaurant.