Army Pours Concrete into Room of Detainee in Qabatia 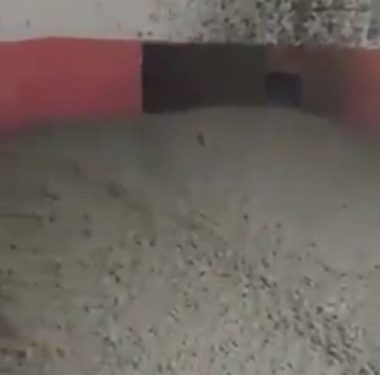 Israeli soldiers invaded on Tuesday the town of Qabatia, south of Jenin, and poured concrete into the room of detainee Yousef Khaled Kamil.

The family said that the soldiers surrounded their property, and poured the concrete into their detained son’s room in their family home. Yousef is imprisoned by Israel for allegedly killing an Israeli last year in Kafr Qassem.

Jenin Governor Kamil Abu ar-Rob said the soldiers poured 42 cubic meters of concrete into the room as a form of collective punishment against the family. He added that the soldiers were unable to demolish the property, because the family’s residence is located in an apartment building.

Instead, they filled a room in the building with concrete, which will render the apartment building structurally unsound, and inevitably cause it to collapse.

During the invasion, the soldiers attacked Palestinian protesters and fired rubber-coated steel bullets, gas bombs and concussion grenades, in addition to invading homes and occupying their rooftops.

Israeli authorities have a policy of attacking the family home of any Palestinian they have taken into custody on suspicion of harming an Israeli. Instead of holding a trial and sentencing the alleged assailant, the Palestinian who stands accused of a crime against an Israeli must face a military tribunal with no access to adequate legal counsel, as the Palestinian Territories are under Israeli martial law, and have been since 1967.

In addition to charging the accused under a military tribunal, the Israeli authorities also send troops to demolish the family home of any Palestinian who is accused of a crime against Israelis. This is the only place on earth that engages in this type of practice, which is classified as ‘collective punishment’ and a ‘war crime’ under the Fourth Geneva Convention.

According to the Israeli Committee Against Home Demolitions, in 2017 alone, 351 structures were demolished by Israeli forces, rendering 528 Palestinians homeless.

The Israeli organization has noted that 48,743 structures have been demolished by Israeli forces since 1967.