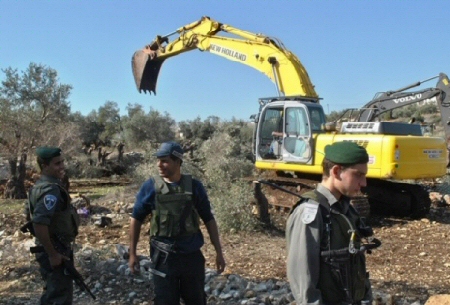 Israeli army bulldozers, on Thursday, razed land in the village of Kharas, to the west of Hebron, as well as land in Rafah, in the southern Gaza Strip, according to WAFA sources.

Abdul Fattah Hmeidan, head of Kharas village council, said that soldiers and members from the so-called “civil administration”, an arm of the military government, raided an area west of the village and proceeded to raze 38 dunams of land, a portion of which was dedicated to  olive cultivation.

He said that the soldiers also destroyed water wells and retaining walls.

Meanwhile, Israeli army vehicles crossed the Gaza border near Rafah, in the south, and razed lands there.

Witnesses informed that six military vehicles, including two bulldozers, crossed the border, reaching more than 150 meters inside Rafah. Drones were also reported to be flying in the area.

The bulldozers razed border land and erected dirt barriers along the border area.