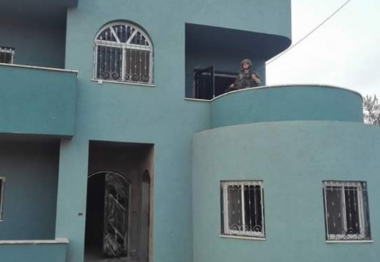 The Israeli army decided, Thursday, to keep the soldiers, who occupied a Palestinian home four weeks ago, in Azzoun town, east of the northern West Bank city of Qalqilia, in the property until next Wednesday.

The property is owned by Mohammad Rasem Hussein, in the northeastern part of the town; it has been occupied by the soldiers, who turned it into a military post and a monitoring tower, since the begging of this month, after they forced Hussein and his family out.

Mohammad was supposed to retrieve his property this morning, but when he went there, the soldiers handed him a new military order, issued on Wednesday evening, extending the illegal takeover of his home until next Wednesday.

In addition, the Nablus office of the Palestinian Prisoners’ Society (PPS), in northern West Bank, has reported that the soldiers abducted four young Palestinian men, after invading their homes and violently searching them, in the governorate.

Furthermore, the soldiers invaded several areas in the southern West Bank city of Hebron, illegally confiscated cash and a car, and abducted seven Palestinians, in addition to summoning a former political prisoner for interrogation.