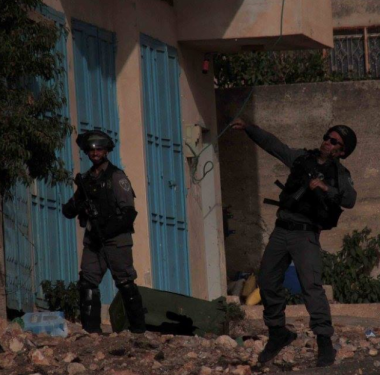 Israeli soldiers abducted, on Thursday at dawn, a young Palestinian man from his home in Kufur Qaddoum town, east of Qalqilia, in the northern part of the occupied West Bank.

The soldiers invaded the town from several directions, before breaking into the home of ‘Assef Hikmat Ali, 20, violently searched the property, and abducted him.

Kufur Qaddoum is subject to frequent military invasions, and violations, as the Palestinians, accompanied by Israeli and international peace activists, continue the weekly popular protests against colonies, the Annexation Wall, and the ongoing closure of the town’s main road, which was blockaded by the army more than 14 years ago.

In addition, the Nablus office of the Palestinian Prisoners’ Society (PPS), in northern West Bank, has reported that the soldiers abducted four young Palestinian men, after invading their homes and violently searching them, in the governorate.

The soldiers also invaded several areas in the southern West Bank city of Hebron, illegally confiscated cash and a car, and abducted seven Palestinians, in addition to summoning a former political prisoner for interrogation.