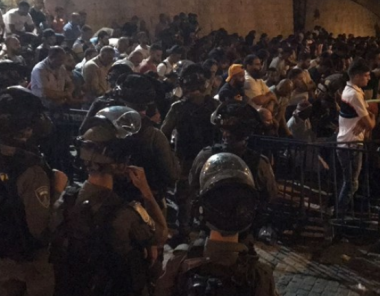 Israeli soldiers injured, on Thursday evening at least 121 Palestinians in the courtyards of Al-Aqsa Mosque, and the Old City, in occupied East Jerusalem.

The soldiers assaulted the worshipers following evening prayers, held in Al-Aqsa Mosque, courtyards and near the gates of the old city, and fired dozens of concussion grenades and rubber-coated steel bullets.

The Maan News Agency said the soldiers prevented hundreds of Palestinians from entering Al-Aqsa Mosque, an issue that pushed them to pray outside the holy site, including near the mosque’s ancient gates, and in the surrounding streets.

Hundreds of young Palestinian men, who were denied access to the mosque, prayed outside the holy sites near its gates and in the streets.

It added that the soldiers closed many of the gates, including Bab Hotta, while hundreds of officers were also deployed in the courtyards of the mosque and the Old City.

The soldiers then announced that only elders and women would be allowed into the holy site, for what they called “security considerations,” before the army and police resorted to excessive force to remove the worshipers, and issue that led to clashes.

The Palestinian Red Crescent (PCR) said its medics provided treatment to 113 Palestinians, adding that among the wounded are persons who were assaulted by the soldiers, and suffered fractures and bruises, in addition to many who were shot with rubber-coated steel bullets, gas bombs and concussion grenades. 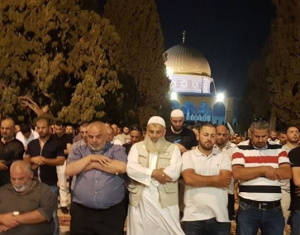 The PRC added that its medics moved fifteen wounded Palestinians to hospitals and medical centers in occupied Jerusalem.

It also stated that the soldiers prevented its ambulances from reaching the gates leading to the mosque, and issue that forced the medics to rush into the holy site on foot carrying their stretchers and first aid tools.

It is worth mentioning that, despite the Israeli restrictions and blockades, more than 30.000 Palestinians managed to enter Al-Aqsa courtyards and held evening prayers. 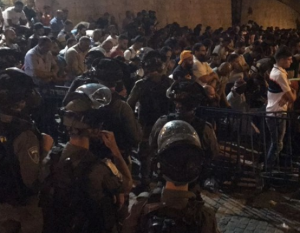