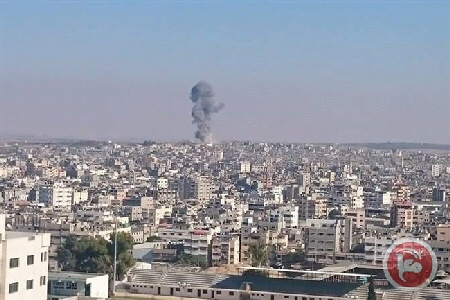 The Israeli army shelled a site allegedly used by Palestinian militant groups in the central Gaza Strip, on Thursday, after a rocket reportedly fired from the Gaza Strip hit an “open” area of southern Israel.

Editor’s note: Default resistance rockets are typically constructed of little more than a hollow tube stuffed full of dynamite. They are not equipped with guidance systems and, typically, fall into unpopulated regions of the Negev Desert, in Southern Israel. (PNN archive image, Operation “Protective Edge”, 2014)
Israeli military vehicles stationed along the border between Gaza and Israel were said to have shelled an area east of the Maghazi refugee camp, without causing any injuries.
An Israeli army spokesperson told Ma’an News Agency that they were “looking into the reports”.

Earlier in the day, an Israeli army spokesperson said that a rocket fired from the Gaza Strip hit an open area designated as the “Eshkol regional council”, causing no injuries.
The shelling and rocket came a day after another rocket hit Israel and the Israeli army launched airstrikes in the besieged Palestinian territory.
Israeli airstrikes and artillery shells hit multiple targets in the blockaded Gaza Strip on Wednesday, after a rocket reportedly  fired from the blockaded Gaza Strip landed on a road inside the Israeli city of Sderot, earlier that day.

No injuries were reported on either side.

The Salafist group Ahfad al-Sahaba reportedly claimed responsibility for Wednesday’s rocket fire.
The Israeli army has previously said it holds the Hamas movement — the de facto rulers of the Gaza Strip — responsible for all attacks from the territory, although other Palestinian militant groups are active in the small coastal enclave.

The Palestinian Authority (PA), meanwhile, condemned Israeli shelling in Gaza, calling on the international society to quickly intervene to stop Israeli aggressions on Gaza and force Israel to end its near decade-long siege on the small Palestinian territory.

Hamas spokesman Sami Abu Zuhri condemned, on Wednesday, the Israeli attacks on the besieged enclave, saying that Hamas could not “stand by idly” if Israel continued its escalation and called upon the international community to stop Israel’s aggression in Gaza.

Meanwhile, an Israeli army air force pilot died and another was injured on Wednesday, as their fighter jet crashed while returning from carrying out airstrikes in Gaza.

The cross-border incidents are the latest to occur since Israeli forces carried out several airstrikes on the besieged Gaza Strip in mid-September, after a rocket was launched from Gaza and exploded in an open area in southern Israel. No injuries were reported.

September’s airstrikes came as the second wave of Israeli shelling to strike the besieged Gaza Strip in the span of a month, while a few weeks earlier the Israeli army fired missiles into the northern Gaza Strip town of Beit Hanoun that left at least five Palestinians injured in late August, after a rocket fired from Gaza fell inside Sderot, with no injuries or damage reported by the Israeli army.

On July 1, Israeli forces launched airstrikes at several sites allegedly used by Palestinian factions in the besieged coastal enclave in response to a rocket fired from Gaza which landed in Sderot.

In May, a Palestinian woman was killed during several consecutive days of sustained airstrikes and tank shelling from Israeli forces, allegedly in response to cross-border mortar shelling and a rocket being fired from the Gaza Strip.

The crippling blockade was imposed following the victory of Hamas in the 2006 Palestinian elections and the subsequent 2007 clashes between Fateh and Hamas, which left Hamas in control of the Gaza Strip and Fatah in control of the occupied West Bank.