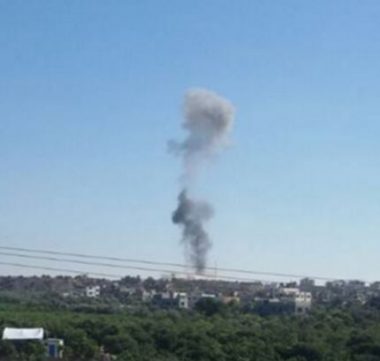 For the second time in just a few hours, The Israeli Air Force and army fired several shells and missiles, on Wednesday, targeting various areas of the Gaza Strip, after a shell was fired earlier into Sderot, in the Negev.

The Israeli Air Force fired at least one missile into the Naval Police base, northwest of Beit Lahia, in the northern part of the Gaza Strip, causing excessive damage.

Another missile struck an agricultural land, close to a gas station, also in northern Gaza, and twice targeted with artillery shells an open area, east of Gaza city.

In addition, the army missiles into a training site for the Al-Qassam Brigades of Hamas, west of Khan Younis, in the southern part of the Gaza Strip.

Also Wednesday, the army fired artillery shells into a camp run by the Al-Qassam Brigades, east of Beit Hanoun, in northern Gaza.

Dr. Ashraf al-Qedra, the spokesperson of the Health Ministry in Gaza, said the attacks did not lead to casualties.

The Israeli army said the bombarded took place after a shell was fired from Gaza into Sderot town, in the Negev.

Israeli Ynet News said the shell caused no property damage, while a 15-year-old girl and a 60-year-old man “were treated for shock before they were moved to Barzelai Medical Center in Ashkelon.”

Earlier Wednesday, the Israeli army and navy opened fire on Palestinian fishers in Gaza territorial waters, and farmers on their lands, in the besieged Gaza Strip.