Army Shoots A Palestinian Near Nablus 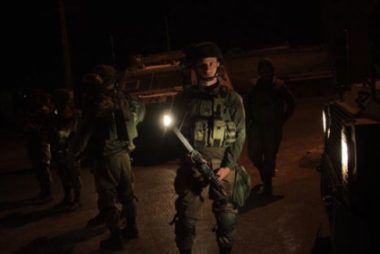 Israeli soldiers shot, on Saturday at dawn, a young Palestinian man in Burin village, south of the northern West Bank city of Nablus, after dozens of illegal colonists invaded it.

Ghassan Daghlas, a Palestinian official who monitors Israel’s illegal colonialist activities in northern West Bank, said many colonists invaded the village before the locals intercepted them, and tried to force them out.

He added that Israeli soldiers invaded the village, before firing many live rounds at the Palestinians.

One Palestinian was shot with a live round in the thigh, and was rushed to Rafidia Hospital, where his condition has been described as moderate.

On Friday evening, undercover Israeli soldiers infiltrated into Deheishe refugee camp, south of Bethlehem, and kidnapped Jihad Issa Ma’ali, 24, while walking near the entrance of the camp.