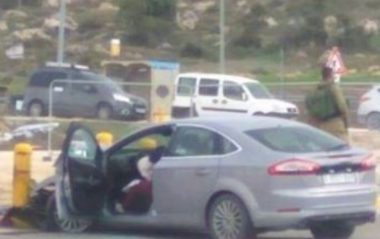 Israeli soldiers shot, and seriously wounded, on Wednesday evening, a Palestinian teenage girl, near the Etzion colony block, south of Bethlehem, in the occupied West Bank, after she allegedly tried to ram them with a car. Initial information revealed that the girl has no driver’s license, and never had any driving lessons.

The girl has been identified as Fatima Jibrin ‘Ayed Taqatqa, 15, from Beit Fajjar town, close to the incident location, south of Bethlehem.

Initial information indicates that the girl does not have a driver’s license, was not experienced in driving a car, and likely became scared seeing the soldiers at the intersection before losing control of her vehicle.

The girl crossed the median of the street, and struck metal bars protecting a bus stop in the opposite direction.

The soldiers opened fire on the car, seriously wounding Fatima, alleging that the incident was a deliberate attack.