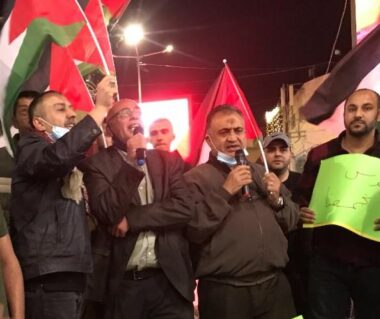 Israeli soldiers shot, on Saturday evening, a young man with live fire, and another with rubber-coated steel bullets, in addition to wounding several other Palestinians during protests near the al-Jalama military roadblock, north of Jenin, in northern West Bank.

Media sources said hundreds of Palestinians marched from the Al-Kabeer Mosque in Jenin, and from several streets and refugee camps, protesting the escalating Israeli violations, especially in occupied Jerusalem and the Al-Aqsa Mosque.

Demonstrators carried Palestinian flags and chanted for national unity and for countering the seriously escalating Israeli violations, especially those carried out by the soldiers and the illegal colonialist settlers, who enjoy the protection of the fanatic right-wing government of Benjamin Netanyahu.

The protesters affirmed that, despite the escalation and constant violations against the holy sites, the Palestinian lands, and property, the Palestinian people will never abandon their cause, and will struggle for their legitimate rights of liberty and independence.

Medical sources said one Palestinian was shot with a live round, and another was shot gas bomb in the face, in addition to many who suffered cuts and bruises, and others who suffered the effects of tear gas inhalation.

In Deir Sharaf village, west of the northern West Bank city of Nablus, the soldiers injured many Palestinians and abducted a child.

In addition, the soldiers injured several Palestinians with rubber-coated steel bullets and caused many to suffer the effects after the army invaded the al-Lubban ash-Sharqiya village, south of Nablus, and attacked protesters.

In related news, the soldiers injured, on Saturday evening, more than a hundred Palestinians south of Nablus, during protests against the Israeli violations in the Al-Aqsa Mosque and the rest of occupied Jerusalem.

Furthermore, the soldiers injured, on Saturday at night, dozens of Palestinians, during protests against the escalating Israeli violations in occupied Jerusalem, especially in and around the Al-Aqsa Mosque.