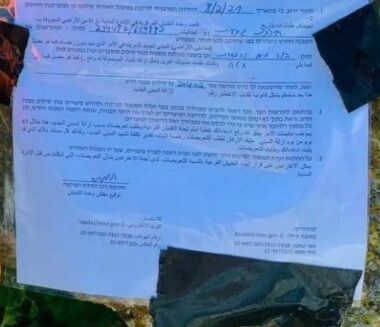 Israeli soldiers invaded, Tuesday, the village of Ghazara, east of the West Bank city of Bethlehem, and posted a demolition order of an under-construction home.

Local sources said the targeted property is a one-story under-construction home owned by Ahmad Mousa Thweib, who is constructing his property on his land.

The Israeli army claims the property was “not licensed by the Civil Administration Office,” the administrative branch of the illegal Israeli occupation.

On Monday, the army ordered halting the construction of four agricultural rooms in Artas village, south of Bethlehem.

Also Monday, the soldiers demolished an under-construction Palestinian home in the Sika village, southwest of the southern West Bank city of Hebron.