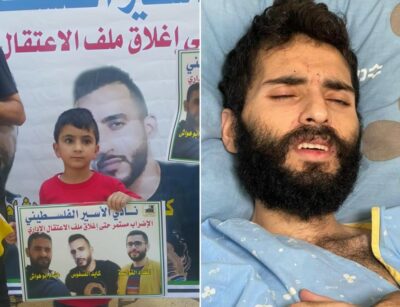 Jawad Boulus, a lawyer with the Palestinian Prisoners’ Society (PPS) has reported, Tuesday, that the Israeli High Court has denied an appeal to freeze or end the Administrative Detention order against a Palestinian detainee who continues the hunger strike for the 73rd day, and faces various complications.

Boulus added that the court based its ruling against Ala’ al-A’raj on a medical report from an Israeli hospital that failed to mention that the detainee could die at any moment especially since his health is deteriorating.

“Such a decision by the court is serious and dangerous,” he said, “When the courts base their decision on cases of Administrative Detainees, held without charges or trial, on the opinion of a doctor, they effectively marginalized the legal venue of these cases.”

Boulus added that judges of the Israeli High Court have been lately referring such legal cases of hunger-striking detainees, who are not facing any charges, to the hospitals as a means to claim that the Prison Authority is not responsible for what happens to them.

Also, even when an Administrative Detention order is frozen, instead of being voided, the courts are not ordering the detainees’ release, but are considering them patients who are holding hunger strikes, however, they are not free, as their families or any party cannot transfer them to Palestinian hospitals, and the Administrative Detention orders can be unfrozen, and even new orders would be issued, once the detainee ends the strike.

It is worth mentioning that al-A’raj, from Tulkarem in northern West Bank, is a civil engineer, and is currently at the infamous Ramla Prison Clinic which lacks basic supplies and specialists.

Ala’ was also abducted and imprisoned several times since the year 2013, including a few times when he was held under the Administrative Detention orders that were imposed on him during separate imprisonments totalling more than 5 years.

During his previous imprisonments, his father died, and his only child was born. His latest abduction was on June 30th, 2021, and he was instantly slapped with a six-month Administrative Detention.