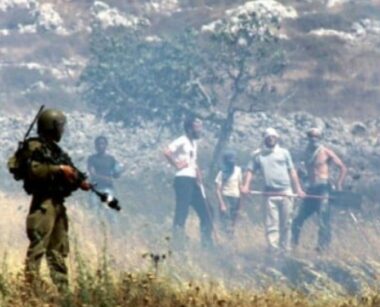 A group of illegal Israeli colonizers attacked, Tuesday, many Palestinians while picking their olive trees in their orchards, west of Nahhalin town, west of Bethlehem in the occupied West Bank.

Hasan Breijiyya, the head of the Bethlehem office of the Wall & Colonization Resistance Commission, stated that the colonizers came from Daniel illegal colony, which was built on stolen Palestinian lands.

Breijiyya added that the colonizers assaulted Ayed Abdul-Aziz and his family while picking their trees in their olive orchards in the Banias area, in the western part of the village.

The Palestinians managed to repel the attack and forced the colonizers to leave the orchards and return to their colony.