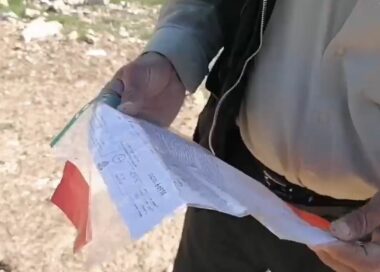 Israeli soldiers invaded, Tuesday, Beit Ta’mar area, east of Bethlehem city, south of occupied Jerusalem in the West Bank, and delivered notices for the demolition of barns and sheds.

Local sources in Beit Ta’mar said the soldiers, accompanied by personnel of the so-called “Civil Administration Office,” the administrative branch of Israel’s illegal military occupation, invaded the area and posted the demolition orders.

They added that the sheds and barns are owned by a local farmer, identified as Suleiman Ahmad al-Wahsh.
The army claimed the structures, built on the Palestinian’s private lands, were installed without permits from the Civil Administration Office, and gave the owner one week to conduct the demolition, or face high fines and fees if the army carries the demolition out using its own vehicles and machines.

Suleiman said he uses the structures for his livestock, and added that he has no other option but to dismantle his structures to avoid the fines and fees.

“What can I do,” he said, “Nobody is helping us, and I just have to destroy my structures before they [the soldiers] return.”

He added that the soldiers came approximately at 9 in the morning, and handed him the demolition orders, in addition to telling him that he needed to comply or face the heavy consequences.

“We only have God to help us,” he said, “Neither the Palestinian Agriculture Ministry, nor anybody, any group, is helping us.”

Beit Ta’mar is one of the several areas subject to escalating violations, especially due to the illegal construction and expansion of the Israeli colonies on stolen Palestinian lands.