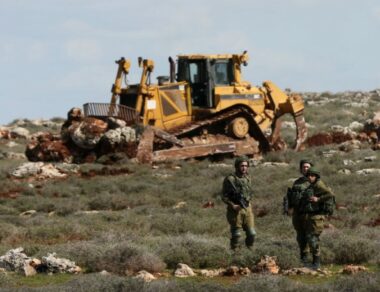 Ghassan Daghlas, a Palestinian official who monitors Israel’s illegal colonialist activities in the northern West Bank, said several army jeeps and bulldozers invaded the lands in the Khallet Hammoud area and uprooted them.

He added that the soldiers surrounded and isolated the area before invading it, and prevented the Palestinians from entering their lands.

The violation is part of escalating attacks in the area as Israel is planning the expansion of several colonies, and the construction of segregated roads on stolen Palestinian lands.

Also Wednesday, the soldiers invaded Palestinian lands in Yatta town, south of the southern West Bank city of Hebron, and confiscated an agricultural structure, owned by Palestinians from the local al-Yatim family.

The structure is near the illegal Susiya illegal colony which was built on stolen Palestinian land.