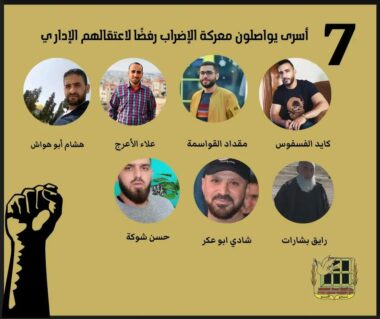 The Palestinian Prisoners’ Society (PPS) said seven Palestinian detainees in Israeli prisons are ongoing with the hunger strike and added that one of them started his strike 83 days ago.

The PPS said that one of the hunger-striking detainees is Mohammad al-‘Arda, one of the six detainees who managed to escape from the high-security Gilboa’ Israeli prison on September 6th, before they were captured.

It said that al-Arda started the hunger strike, Monday, protesting the severe punitive measures against him, including the assaults and the solitary confinement in Asqalan prison.

The six other detainees are ongoing with the hunger strike protesting their continued illegal and arbitrary Administrative Detention orders, holding them captive without charges or trial.

One of them is Kayed al-Fasfous, who started the hunger strike 83 days ago and is determined to continue the strike despite his seriously deteriorating medical condition.

The detainees are facing seriously deteriorating health conditions, including sharp pain, fatigue, and a serious deficiency in minerals, but are determined to continue the strike.

It is worth mentioning that, on Sunday, the Ofer Israeli military court denied an appeal, filed by the Palestinian Detainees Committee, demanding the release of Kayed al-Fasfous, by voiding the illegal Administrative Detention orders against him.

In addition, detainee Miqdad al-Qawasma is held at the Kaplan Israeli medical center, confined to his bed.