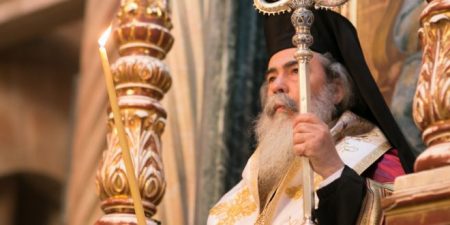 PLO Executive Committee Member Dr. Hanan Ashrawi, on Thursday, expressed concerns regarding the statement of the Greek Orthodox Patriarch of Jerusalem, Theophilos III, who recently praised Israel for being a “democracy” that “respects freedom of worship.”

In an official statement, Ashrawi said that “Theophilos III is very well informed of the Israeli violations of the freedom to worship, [with regard to] his own community during Easter, and is also aware [that] the occupation of the Saint John Convent, near the Church of the Holy Sepulcher, today, turned into another illegal Israeli settlement.”

“Theophilos III is also well aware of the impact of the Israeli occupation of East Jerusalem, [of] the Palestinian people in general, and [of] the Christian population, in particular. His statement could only be delivered by someone who aims at distorting reality by disregarding the rights and aspirations of his own congregation.”

“Additionally, this statement contradicts all international reports on the situation of freedom of worship under Israeli occupation, and, in particular, in and around occupied East Jerusalem,” Ashrawi added.

“We are eager to know if Patriarch Theophilos did anything in order to defend the lands that members of his own congregation recently lost in Cremisan, or the fact that thousands of Palestinian Christians cannot access their own holy sites in occupied East Jerusalem, due to Israel’s illegal annexation wall and other movement restrictions. Undoubtedly, Patriarch Theophilos knows very well the situation of thousands of Palestinian families, including hundreds of Christian families that have been divided due to racist Israeli citizenship laws.

Churches and religious leaders have historically provided a voice for justice and peace. The Kairos Document, signed by Palestinian theologians and religious leaders from all congregations, has clearly stated that religious liberty is severely restricted; the freedom of access to the holy places is denied under the pretext of security. Jerusalem and its holy places are out of bounds for many Christians and Muslims from the West Bank and the Gaza Strip. Even Jerusalemites face restrictions during the religious feasts. Some of our Arab clergy are regularly barred from entering Jerusalem.”

Finally, Ashrawi called upon Patriarch Theophilos III to work for justice and peace of the oppressed, rather than covering up the daily violations of the oppressors.