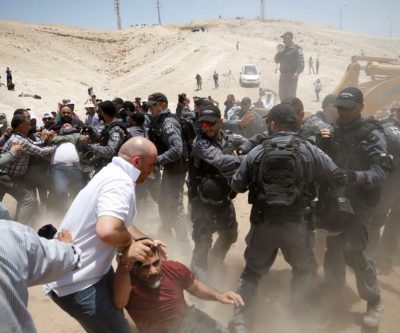 The Head of the Commission Against the Israeli Annexation Wall and Colonies, Walid Assaf, said the Israeli High Court’s decision to temporarily halt the demolition of al-Khan al-Ahmar Bedouin Palestinian community, east of Jerusalem, is a positive step forward, but added that the legal and political battle to save the community is approaching, as it is still under the serious threat of demolition and displacement.

His statement came after the Palestinians managed to achieve a temporary injunction by the Israeli Supreme Court, giving the army until July 11trh, to respond to a petition by the villagers, who said they were denied construction permits due to unfair policies.

During a press conference in al-Khan al-Ahmar village, Assaf said the lawyers of the commission, supported by the steadfastness of the locals, Israeli and international peace activists, managed to achieve this victory, this first step.

He added that the temporary injunction gives the legal team some time to study the earlier decision of the High Court thoroughly allowing the demolitions, to prepare for a new defense and find ambiguities in the initial ruling.

“The lawyers only received the file five days ago, started preparing a structural plan for the village, and filed it with the Israeli Civil Administration in Beit El,” Assaf stated, “But It refused to receive the plan, and informed us that there is a political decision for the demolition of al-Khan al-Ahmar.”

Assaf said that after Civil Administration refused to receive the file, the lawyers rushed to the Israeli High Court, on Thursday evening, demanding an injunction halting the displacement and demolition.

“The Israeli judge, who issued the initial verdict to demolish and displace al-Khan al-Ahmar, is a colonizer from Kfar Adumim settlement, next to the Palestinian community,” he added, “We then achieved the temporary injunction, and a ruling asking Israel to explain while the structural plan was rejected.”

“For eighteen consecutive days, we sent a clear message to the world to stand with our people, and prevent their displacement,” he added, “This issue does not only impact al-Khan al-Ahmar; there are 46 other Bedouin villages facing the same fate of destruction and displacement.”

The official added that “the Palestinian leadership, all factions, unions and the peace activists managed to foil America’s so-called Deal of the Century on the field level, but the struggle against the displacement of our people in Area C of the occupied West Bank is still ongoing, especially since Israel wants to remove the indigenous Palestinians to control the lands and build colonies.

Assaf added that the case of al-Khan al-Ahmar Palestinian village is not only about displacement of the inhabitants, but also part of the ongoing struggle against the Israeli plans to build thousands of colonialist units by displacing dozens of Bedouin communities in the occupied West Bank.

Adnan Al-Husseini, a member of the Executive Committee of the Palestine Liberation Organization (PLO), said the Palestinian leadership rejected the so-called ” of the Century,” presented by U.S. President Donald Trump, and added that part of rejecting this plan is the struggle to save al-Khan al-Ahmar.

“Israel is committing these crimes with a complete the support of the United States; our people need to be prepared for a lengthy battle,” he said, “The case of al-Khan al-Ahmar is not over, and what is needed is more support and solidarity, especially since this case is part of the Israeli attempts to fully annex East Jerusalem and its surrounding areas, by first removing the locals.”

Arab Member of Knesset, Dr. Ahmad Tibi, said the Israeli occupation wants to subject the Palestinians to another Nakba, like what happened to them in 1948, and added that the inhabitants of al-Jahalin Bedouin village, al-Khan al-Ahmar, every community, and every Palestinian will remain steadfast, and will never abandon their legitimate rights.

“Israel is targeting al-Khan al-Ahmar because it is the gate to occupied Jerusalem, it wants to implement its illegal E1 colonialist project,” Dr. Tibi stated, “What is happening to the Palestinians is ethnic cleansing.”

He also said that the delegations and diplomats who visited al-Khan al-Ahmar to protest the Israeli decision had an impact, but what is needed is real policies to oblige Israel to refrain from implementing its illegal projects.

“What is needed from the European Union is political and economic sanctions on Israel,” Dr. Tibi said, “Otherwise, the Israel plans will continue. We also need massive support from the Arab countries and the international community to foil the ‘Deal of the Century’, to prevent the implementation of this conspiracy against Jerusalem, and the legitimate rights of the Palestinian people, struggling for the liberation and independence of their homeland.”