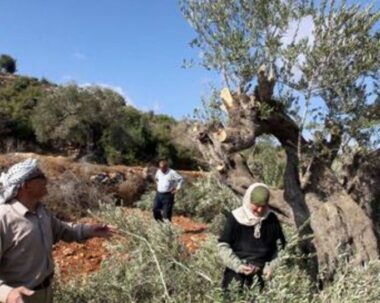 Israeli soldiers invaded, Saturday, Palestinian olive orchards in Qaryout village, south of the northern West Bank city of Nablus, and attacked Palestinians while they were harvesting their olive trees.

Media sources said dozens of soldiers invaded the Palestinian olive orchards before seizing equipment, including ladders and other agricultural tools used by the villagers.

They added that the soldiers attacked many Palestinians, and forced them to leave their orchards at gunpoint, in addition to threatening to abduct and imprison them if they return to their orchards.

In related news, the colonizers cut more than 45 Palestinian olive trees and destroyed a well, Saturday, in Madama village, south of Nablus.