Azarya Incarcerated Despite Efforts to Postpone 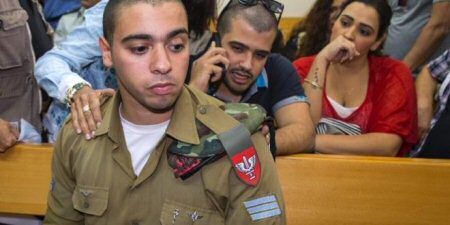 Former Israeli soldier Elor Azarya began his 18-month prison sentence on Wednesday, for the point-blank shooting and killing of a Palestinian in 2016 — after a last-minute attempt to postpone his incarceration.

Azarya was convicted of manslaughter and sentenced to a year and a half in prison, for shooting and killing 21-year-old Palestinian Abd al-Fattah al-Sharif as the disarmed Palestinian lay severely wounded on the ground, after allegedly committing a stabbing attack in the southern occupied West Bank city of Hebron, in March of 2016.

Azarya shot al-Sharif in the head, with a number of witnesses quoting him as saying, “This dog is still alive!” and “This terrorist deserves to die!” before he pulled the trigger.

According to Ma’an, Israeli media reported that dozens of Israelis gathered both outside of Azarya’s home in Ramla and in front of the military prison known as Prison Four, in central Israel, to show support for Azarya, who has been seen by many Israelis as an unjustly punished hero.

Israeli news outlet Ynet reported that the demonstrators’ slogans included “Elor is a hero!”, “Do not fear, Elor, Israel is with you!” and “If you don’t return the boy, we will overturn the state!”

Meanwhile, The Times of Israel said that Azarya held a party on Tuesday night, before heading to prison, during which Israeli pop song “Mother’s Hero” was played — a likely reference to the portrayal of Azarya as Israel’s son who was only doing his duty.

Israel’s shoot-to-kill policy has received widespread support among Israeli citizens, as a 2016 poll by the Israel Democracy Institute found that 47 percent of Jewish Israelis supported the sentiment that “any Palestinian who carries out a terror attack against Jews should be killed on the spot, even if he has been captured and clearly does not pose a threat.”

“This is a sad day for the state, for the (Israeli army) and for some 85 to 90 percent of the citizens of Israel,” The Times of Israel quoted Azarya’s lawyer Yoram Sheftel as saying on Wednesday.

Sheftel had requested, on Sunday, that Azarya’s prison sentence be postponed until Israeli army Chief of Staff Gadi Eisenkot ruled on whether to commute Azarya’s sentence to community service — a request that was rejected by the Israeli military court of appeals on Tuesday, Ynet reported.

The verdict confirming Azarya’s sentence, which was upheld by an appeals court in late July, will only become peremptory — final — on Sept. 7, meaning that Eisenkot could not grant Azarya’s request before then.

During the appeals process, Israeli judges highlighted that Azarya had “never expressed remorse or questioned his actions” as one of the main reasons for not lowering his sentence.

In addition to seeking a sentence reduction from Eizenkot, Azarya’s lawyers could also request a pardon from Israeli President Reuven Rivlin.

Azarya’s defense had argued that the young Israeli man has been unfairly targeted and that his sentencing represents a “selective enforcement of the law,” according to Human Rights Watch (HRW).

“Indeed, Human Rights Watch has repeatedly documented the fact that the problem is not the conduct of a single soldier, but an atmosphere of immunity from punishment for illegally killing Palestinians,” the rights group said in June.

“Responsibility for upholding ethical and legal norms doesn’t rest solely on the shoulders of a single 20-year-old soldier, but also on the senior officials who sent him — and too many others — the wrong message regarding the use of deadly force.”

The case has been denounced as a “show trial” for focusing on the case to distract from a wider culture of impunity for Israeli forces, as Azarya was charged with manslaughter for what was termed by rights groups as an “extrajudicial execution” and by the victim’s family as “cold-blooded murder.”

Following the initial announcement of the 18-month sentence, the al-Sharif family had said that they were “not surprised” by the lenient sentence — noting that the soldier received less prison time than a Palestinian child would for throwing stones.

Azarya was the only member of Israeli forces to be charged with killing a Palestinian in 2016 — when at least 109 Palestinians were shot and killed by Israeli forces and settlers — according to Human Rights Watch.