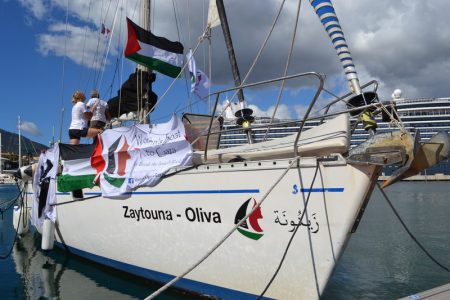 Bahar said, in a statement, that intercepting the ship is a kind of privateer since the ship is sailing in the international waters.

“There are Arab Parliaments on board and arresting them is a breach of parliamentary immunity,” pointed Bahar.

He praised the participation of European activists in this ship.

In the statement, Bahar denounced, according to Al Ray Palestinian Media Agency, the international silence of the imposed seige on the Gaza Strip and its bad effects on Gazans.

The captain of the Zaytouna announced, on Wednesday morning, that they are 100 nautical miles off Gaza’s shores, almost 20 hours away from the territorial waters of Palestine.

She went on saying that all activists on board the ship are okay, and that they may arrive Gaza on Thursday, at dawn, unless the Israeli navy intercepts them.

She explained that they expect an Israeli attack at any moment, calling the world to stand with their humanitarian mission in order to break the siege imposed on Gaza.

On the other hand, Israeli occupation forces are preparing to intercept the ship by force, arrest the activists on its board, and take the vessel to the port of Ashdod. Israel will, then, transfer them to their home countries after signing pledges not to return a second time, according to Israeli newspaper “Maariv”.