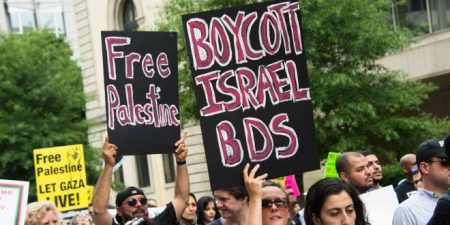 40 UK towns and cities saw actions across the week, from Brighton to Bristol, Liverpool to Lewisham, Edinburgh to East London, Cardiff to Chester, and many places in between.

During the International Week of Action on Hewlitt-Packard, it was revealed that the world’s largest security firm, G4S, had agreed to relinquish most of its Israeli business deals. After years of campaigning, BDS activists are celebrating a victory against a company whose complicity in Israel’s crimes against the Palestinian people is coming to an end.

The unprecedented scale of the International Week of Action on HP, and the success of the campaign against G4S would not have been possible without people, all around the world, coming together to challenge corporate complicity in Israel’s occupation.

The Palestinian News Network (PNN) thanks its audience for standing in solidarity with Palestinians. 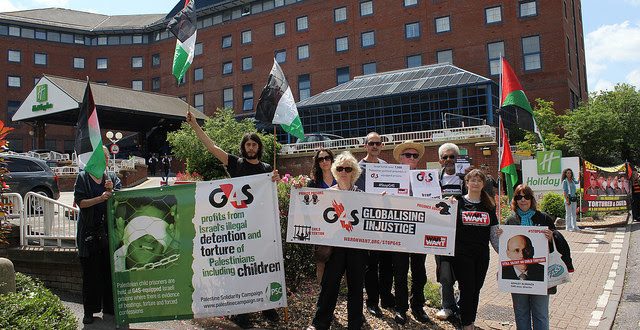 From the BDS National Committee:

Marking the 10-December UN Human Rights Day which, this year, raises the slogan, “Stand up for someone’s rights today,” about 200 legal scholars and practicing lawyers from 15 European states have issued a statement that stands for Palestinian rights and considers the Boycott, Divestment and Sanctions (BDS) movement for Palestinian freedom, justice and equality as “a lawful exercise of freedom of expression.”

While not taking a position for or against BDS, the European legal scholars’ statement defended the right to pursue Palestinian rights under international law through BDS measures against Israel. It said:

“States that outlaw BDS are undermining this basic human right and threatening the credibility of human rights by exempting a particular state from the advocacy of peaceful measures designed to achieve its compliance with international law.”

Robert Kolb, who served as a legal expert with the Swiss Foreign Ministry, commented:

“The right of citizens to advocate for BDS is part and parcel of the fundamental freedoms protected by the International Convention on Civil and Political Rights.”

John Dugard, who served at the International Court of Justice, stated:

“No government ever attempted to outlaw or criminalize the Anti-Apartheid Movement for advocating boycott, disinvestment or sanctions to compel South Africa to abandon its racist policies.  BDS should be seen as a similar movement and treated accordingly.”

Eric David, former legal counsel of the Council of Europe and the Belgian government, explained why civil society has increasingly supported BDS against Israel saying:

“It is in response to [the] irresponsible passivity of States that civil society created the BDS movement. Repression of BDS, therefore, comes as support of Israel’s violations of international law, and of the failure of States to perform their commitment made in 2005 to ‘strictly respect the aims and principles of the Charter of the United Nations.’”

“This is a defining moment in the struggle against Israel’s patently repressive legal war on the BDS movement for Palestinian rights. Leading European jurists have now confirmed that advocating and campaigning for Palestinian rights under international law is a legally-guaranteed right for Europeans and indeed all citizens of the world. Israel’s desperate attempts to outlaw the BDS movement and to legally bully its supporters into silence threatens democratic space, the jurists said in their critical statement.”

“By joining Israel’s anti-democratic war of repression on BDS, the governments of France and the UK have become more isolated than ever. In addition to this definitive endorsement by European legal scholars for the right to BDS, the European Union, as well as the governments of Sweden, Netherlands and Ireland, along with hundreds of European political parties, trade unions and civil society organizations, have unequivocally stated their support for the right of citizens to engage in boycotts against the Israeli state.” 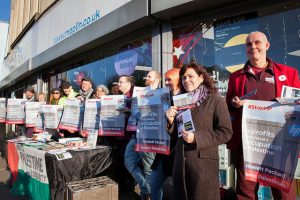 “The BDS movement has grown tremendously across Europe in recent years, mainly spurred by popular outrage at Israel’s impunity in entrenching its decades-long regime of occupation, settler-colonialism and apartheid against the indigenous Palestinian people.”

“This momentous statement by European jurists not only vindicates BDS human rights defenders who have insisted that BDS is protected free speech. It will undoubtedly add a crucial layer of legal protection for European BDS networks and citizens in their efforts to end European complicity in Israel’s regime of oppression, especially in military trade and research, banking, and corporate involvement in Israel’s violations of international law.”