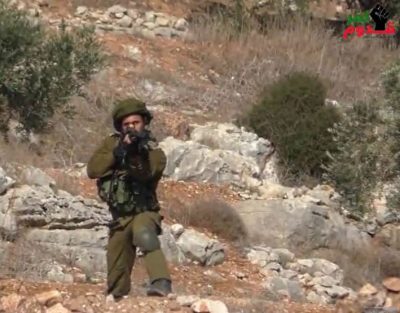 Morad Eshteiwy, the coordinator of the Popular Committee in Kafr Qaddoum, said the soldiers surrounded the town before invading it.

He added that the invasion led to clashes between the soldiers, who fired gas bombs and concussion grenades, and many local youngsters, who hurled stones on the army vehicles.

The soldiers also tried to ambush many Palestinians, to abduct them, but their hideout was soon uncovered, and the army was unable to detain them.

Kafr Qaddoum holds weekly protests against the illegal Israeli annexation wall and colonies built on Palestinian lands, and demanding the military to open the town’s main road that was blockaded 14 years ago, to provide easy access to Israeli colonies driving to and from Kedumim colony, illegally built on the villagers’ lands.

This week’s protest also came to commemorate the second anniversary of the death of Palestinian government minister, Ziad Abu Ein, who was killed by the Israeli army during a nonviolent activity, near Ramallah.