Many Palestinians Injured During A Nonviolent Procession Near Ramallah 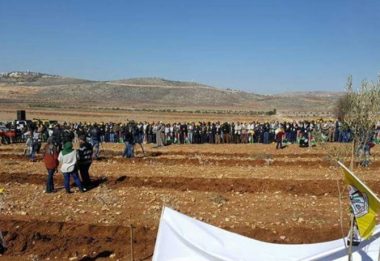 Israeli soldiers assaulted dozens of Palestinian, and international activists, participating in a peaceful procession on Palestinian orchards in Turmus Ayya town, east of Ramallah, marking the second anniversary of the death of government minister, Ziad Abu Ein, who was killed by the army.

The soldiers assaulted the peaceful protesters while planting olive trees and marching for liberty and independence, and fired gas bombs at them, causing many to suffer the severe effects of teargas inhalation.

Ramallah governor, Laila Abu Ghannam, said the Palestinians will continue their struggle for freedom and independence, despite the escalating Israeli violations.

She added that when Israel cleared the soldier who killed Aby Ein, it sent a direct message as an extremist fanatic government, and that it’s so-called justice system is just a front for this illegal occupation.

“They are going down in history boobs as murderers,” she said, “Our people will never quit this legitimate struggle for liberty, justice and independence.”

“We want to live in peace, we don’t want our children to continue being killed by the soldiers,” the minister stated, “Our resistance and determinations echo our struggle around the world.”

On his part, Waleed Assaf, the head of the Committee against the Waal and Colonies, said resistance is the strategic choice to end this illegal Israeli occupation, and added that all international laws and treaties guarantees the right of occupied nations to fight their oppressors and invaders.

The Minister’s brother, Mahmoud Abu Ein, said the Palestinians who were killed by the Israeli army are the bridges for freedom, and called for ongoing struggle.

He added that Ziad was repeated abducted, tortured and imprisoned by Israel, and was an influential figure on the local, regional and international levels.