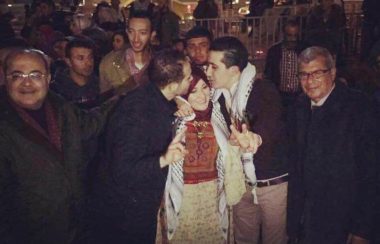 The Israeli authorities released, on Thursday evening, Mohammad and his brother Mahmoud, who were held under illegal Administrative Detention orders, and went on hunger strike for 82 consecutive days, until reaching an agreement for their freedomBeth.

Mohammad and Mahmoud were welcomed by hundreds of Palestinians in a massive celebration at the Manger Square, in front of the Church of Nativity, in Bethlehem, in the occupied West Bank.

They thanked every Palestinian and international who stood in solidarity with them during their strike, and thanked President Mahmoud Abbas.

It is worth mentioning that Arab Members of Knesset (MK) Dr. Ahmad Tibi and Osama Sa’adi, were among the Palestinians who celebrated the release of the two brothers in Bethlehem.

The Balboul’s also expressed their gratitude to Dr. Tibi and Sa’adi who constantly visited them, stayed with them, during the strike, and acted on the local, regional and international levels to advocate for the rights of the two detainees.

The brothers said that their victory was not personal, but a victory to every detainee, arbitrarily held by Israel, in direct violation of International Law.