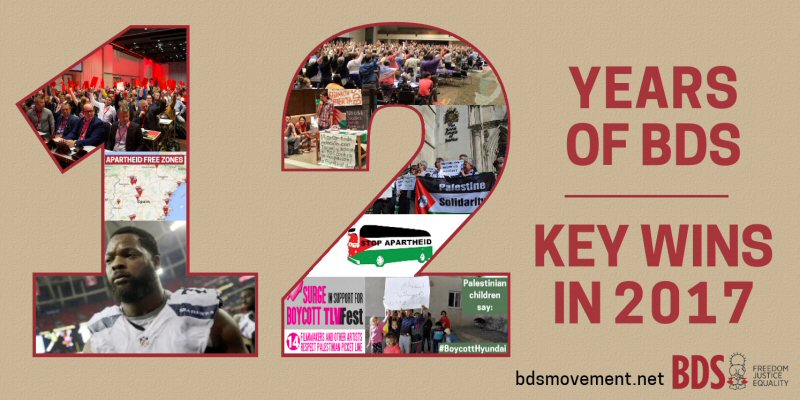 July 9, 2017 marks 12 years since the Boycott, Divestment and Sanctions (BDS) movement was born. It’s been 12 years since an impressively large and diverse coalition across Palestinian civil society surmounted incredible odds to unify around three basic Palestinian rights and a nonviolent, inclusive, anti-racist path of struggle to achieve them. Despite the fragmentation, military occupation, segregation and dispossession, we came together to assert our people’s right to freedom, justice, equality and dignity.

The 2005 BDS Call embodies overwhelming Palestinian support for demanding an end to Israel’s military occupation and the dismantling of its illegal wall, an end to its institutionalized and legalized system of racial discrimination which meets the UN definition of apartheid, and the right of refugees to return to their homeland as stipulated in international law.

Inspired by the South African anti-apartheid movement and the American Civil Rights Movement, entities representing Palestinians everywhere called on people of conscience worldwide to adopt pressure tactics in support of our struggle for rights. BDS calls for boycott and divestment initiatives in the academic, cultural, economic and sports fields and for pressuring states to implement meaningful sanctions against Israel until it fully complies with its obligations under international law.

As BDS turns 12 this week, here are 12 indicators of the movement’s growing impact from 2017 which mark the occasion:

Also from the BDS National Committee — Coming Up on Facebook Live: A Conversation with Pink Floyd’s Roger Waters