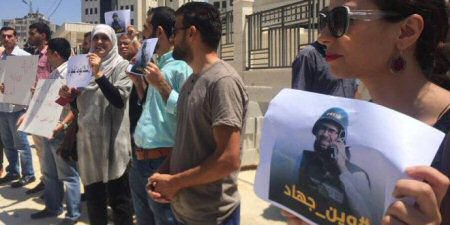 Dozens of Palestinian journalists organized a protest outside of the Palestinian prime minister’s office in Ramallah on Saturday, urging both the Palestinian Authority (PA) in the occupied West Bank and Hamas authorities in the Gaza Strip to immediately release all imprisoned journalists.

Jihad Barakat was detained in the northern occupied West Bank district of Tulkarem after he took photos and filmed Palestinian Prime Minister Rami Hamdallah’s motorcade passing an Israeli-controlled military checkpoint. His detention has since been extended at least until Sunday next week.

All journalists stressed that they’re against the political detention of journalists in any form, stressing the need to grant immunity to journalists to perform their work, rejecting the reasons announced by the government to arrest journalist Barakat.