Beersheba Bedouin Market to be Closed, Palestinians and Jews Protest 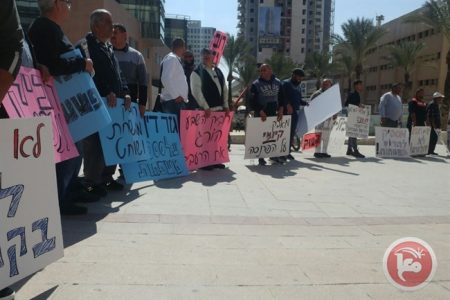 Dozens of Palestinian and Jewish citizens of Israel protested in front of the municipality of Beersheba, on Sunday, against the mayor’s decision to close the city’s Bedouin market.

Mayor Ruvik Danilovich decided to close Beersheba’s traditional Bedouin market, which had been in operation for some 120 years, by the end of the month.

An appeal has already been filed against the decision to postpone the closure of the market, known colloquially as the “Thursday market.”

Danilovich said, according to Ma’an,  that the decision to close the market was made after experts found that the market did not “represent real Bedouin heritage,” and said that the location of the market could be turned into a touristic, educational or entertainment center.

However, protesters expressed their anger towards the decision, arguing that the market was an important institution for the merchants working there, as well as for low-income customers who could not afford shopping at other more expensive locations.

Protesters held signs reading “Ruvik, how much did they pay you to kill us?,” “struggling to make a living,” “racist Ruvik,” or otherwise calling the closure a “death sentence against 1,000 families” dependent on the market.

Israeli authorities have cracked down the Bedouin community in Israel since the beginning of the year, as home demolitions have come into the limelight, notably due to the outrage caused by the demolitions in the town of Qalansawe and the deadly demolition raid in Umm al-Hiran in January.

In December, Israeli Prime Minister Benjamin Netanyahu released a video to address settlers of the Amona outpost, assuring them that he would commit to “enforcing laws” on “illegal construction” in Israel, referring primarily to Palestinian communities that are often forced to build without Israeli-issued building permits, due to what rights groups have attributed to discriminatory zoning policies in Israel which have excluded many Palestinian-Israeli communities, notably Bedouins, from being included in the regional and municipal development plans.

The spike in home demolitions in Palestinian-majority areas of Israel has come after Israeli demolitions of Palestinian homes in the occupied West Bank and East Jerusalem reached a record high in 2016.

Rights groups have claimed that the demolitions in Bedouin villages are a central Israeli policy aimed at removing the indigenous Palestinian population from the Negev and transferring them to government-zoned townships to make room for the expansion of Jewish-Israeli communities.