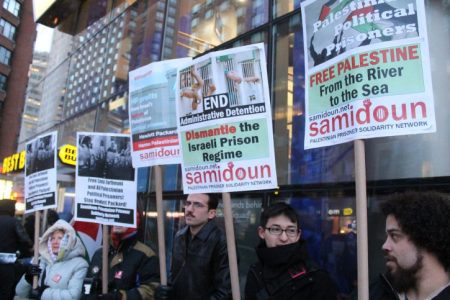 Protesters in New York City gathered outside the Best Buy at Union Square on Friday, 3 March to protest the imprisonment of Lena Jarbouni and fellow Palestinian women prisoners and urge Hewlett-Packard (HP) corporations to get out of the business of profiting from occupation, apartheid and colonialism.

Samidoun Palestinian Prisoner Solidarity Network organized the protest in advance of International Women’s Day to highlight the situation of approximately 51 Palestinian women held in Israeli jails, among nearly 7,000 Palestinian political prisoners. They include 13 minor girls under the age of 18, and Palestinian women prisoners have recently escalated complaints regarding their conditions of imprisonment, especially for the 14 women prisoners who are injured, shot by Israeli occupation forces and requiring extensive medical care and personal assistance, provided mostly by fellow women prisoners.

In particular, protesters highlighted the case of Lena Jarbouni, the longest-held Palestinian woman prisoner. Jarbouni, from Akka, is a Palestinian citizen of Israel who worked in sewing workshops and was arrested in 2002. She is ill and suffers from a number of diseases. Lina is the spokesperson and representative of women prisoners in HaSharon; sentenced to 17 years, she has three years remaining in her sentence. She received this lengthy sentence for “aiding the enemy” – Palestinian resistance. She was denied essential medical treatment until her fellow women prisoners launched a strike for her treatment. She has played a critical role in advocating for the educational rights of imprisoned Palestinian girls.

Protesters carried signs with images of Jarbouni and fellow women prisoners, highlighting the role of women in the Palestinian national liberation movement, including the prisoners’ movement.

The demonstration also focused on the complicity of Hewlett-Packard (HP) corporations in Israeli occupation, apartheid, colonialism and oppression, including the imprisonment of thousands of Palestinians. Participants distributed flyers and leaflets calling on HP to end its contracts with the Israel Prison Service along with other Israeli entities, and urging shoppers to boycott HP products, including computers, printers and ink, until the corporation stops profiteering from the jailing of Palestinians. There is a growing international campaign against corporations like HP and G4S for their role in the imprisonment of Palestinians, part of the global campaign for boycott, divestment and sanctions.

Samidoun activists will be participating in a wide array of protests and actions in the coming weeks. On Saturday, 4 March, Samidoun joined the March 4 Standing Rock protest, which launched from the NYC Public Library in support of the indigenous struggle to defend the water and land of the Standing Rock Sioux against the Dakota Access Pipeline.

On Wednesday, 8 March, Samidoun will join Palestinian and Palestine solidarity organizations across NYC along with a wide range of women’s organizations and social justice movements as part of the International Women’s Strike. The New York City protest will launch at 4:00 pm from Washington Square Park. The struggles and demands of Palestinian women will be prominently featured in the program, urging reproductive justice, an end to gender violence, labor rights, full social funding, environmental justice, and anti-racism and anti-imperialism.

A protest on Tuesday, 14 March is being organized by Samidoun outside the New York Hilton Midtown against the “Friends of the Israel Defense Forces” annual gala, where fanatical Zionists gather each year alongside Israeli soldiers to raise tens of millions of dollars to support Israel’s political imprisonment and other war crimes against occupied Palestinians. The protest will take place at 5:30 pm outside the hotel and is endorsed by a number of organizations, including Al-Awda NY, the Palestine Right to Return Coalition, the Committee to Stop FBI Reception NYC, International Action Center, Jews for Palestinian Right of Return, NY4Palestine and the United National Antiwar Coalition.