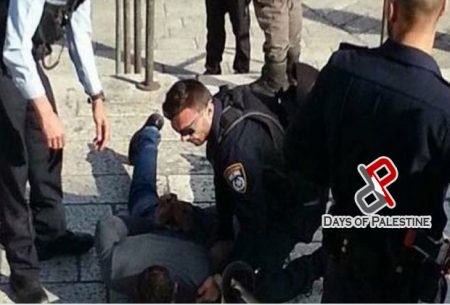 Israeli occupation police beat and abducted, on Sunday morning, a Palestinian citizen after he was beaten by Jewish settlers at Al-Aqsa Mosque.

An eyewitness said, according to Days of Palestine, that Jewish Israeli settlers attacked a Palestinian man while he was entering through the Lion’s Gate.

Then, Israeli police interfered and, instead of sorting out the situation, they beat him, handcuffed and detained him.

According to the sources, the settlers were accompanied by heavy security, and stormed the holy site through Al-Maghrabeh Gate.

On Saturday, Israeli occupation forces attacked a Palestinian citizen in the West Bank city of Al-Khalil (Hebron), and detained him.