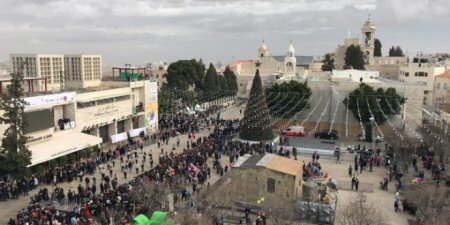 The Palestine News Network (PNN) has an open wave covering the marking of Christmas Eve in Bethlehem’s Manger Square, where thousands of locals and internationals are gathered.

Today’s events will include Christmas Carols organized by the Bethlehem Municipality.

Mayor of Bethlehem, Anton Salman, said that this year’s theme is “hope”, as it represents the hope and persistence of the Palestinian people, and the hope of having a better next year.

“The Palestinian people have succeeded because of the hope they have. We insist on continuing the struggle against the occupation and till we have Jerusalem as the capital of Palestine.”

Speaking about Trump’s decision to make Israel the capital of Palestine, Salman said that the municipality held a press conference the day before, with church clerics, to assure rejection of the decision.

“We Christians, are part of the Palestinian people. Our message, of yesterday’s conference, was to say that we will never be divided, and we are one land, one people, Christians and Muslims.”

The wave, today, will also cover the reception of the Latin Apostolic Administration, Fr. Pierbattista Pizzaballa, who is the Latin Patriarch of Jerusalem.

Zoughbi Zoughbi from Wiam Center for studies said, in an interview, that today’s celebrations mean that Palestinians celebrate life and hope for peace.