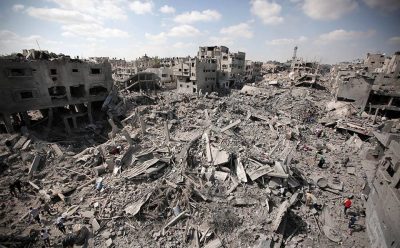 On Sunday morning, 24 December 2017, medical sources at al-Shifa Hospital in Gaza City announced that Mohammad Sami Hashem al-Dahdouh (18) succumbed to wounds he sustained on 08 December 2017 at a protest in Gaza.

Al-Dahdouh suffered a live bullet wound to the neck fired by Israeli soldiers who invaded eastern Gaza to attack the protests. He was near the border area in “Nahel Oz” area, east of al-Sheja’eyya neighbourhood, east of Gaza city. According to Ashraf al-Qidra of the Palestinian Health Ministry, “Mohammad al-Dahdouh died of his wounds on Sunday”.

Al-Sheja’eyya neighbourhood gained worldwide attention in 2014 when Israeli forces spent two nights, July 20 and 21st, dropping thousands of tons of bombs on the crowded residential neighborhood, causing hundreds of deaths, including whole families crushed under the rubble of their homes, huddled together as the bombing continued non-stop for 48 hours.

Mohammad was shot while he was participating in a protest against the U.S President Donald Trump’s Decree on December 6th to recognize Jerusalem as the capital of Israel and move the U.S. Embassy there. Following the December 6th declaration, hundreds of protests sprung up in every part of the West Bank and Gaza Strip, as well as around the world, with tens of thousands of people voicing their outrage at the Trump declaration that effectively denies the Palestinian people’s right to exist.