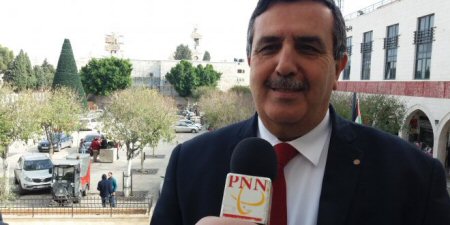 The mayor of Bethlehem, lawyer Anton Salman, on Monday, made comments about an Israeli report which portrayed Bethlehem city as if it were simply celebrating Christmas and separating itself from the Palestinian struggle, and the ongoing political situation, while there are protests and clashes currently ongoing in all Palestinian cities,  against Donald Trump’s decision to move the U.S. embassy from Tel-Aviv to Jerusalem.

“Israeli attempts to create false illusions about the unity of the Palestinian people through promoting  deceptive videos will be futile,” Salman told PNN in an exclusive interview.

He added that the content and timing of the video and interviews were manipulated, where the report showed that there have  been celebrations and tree-lighting, following the Trump declaration on 6 December, while the actual date of lighting the tree was over a week ago, on 2 December 2017.

Meanwhile, the interview was filmed on 28 November.

The report was published on 8 December, two days after the start of the protests and the Trump declaration, and 10 days after the interview was recorded.

Salman added that, as a sign of protest, the tree lights were turned off for three days, following the decision, since it offends all Palestinians, including Christian Palestinians.

Salman said the Bethlehem municipality would file a lawsuit, in the Palestinian and Israeli courts, against the Israeli channel and its crew, as well as take measures to prevent Israeli journalists from entering Bethlehem because of the abuse and falsification it takes to the media.

Salman called on all Palestinian media and journalists to react responsibly, especially in light of the difficult circumstances and targeting of the Palestinian cause and society, considering all these practices an attempt to attack Palestinian society in the media.

On the matter of the visit of US Vice President Mike Pence, the mayor of Bethlehem said that the municipality had already released statements explaining that the same position in line with the official stance, which denounced the visit  saying that they will not receive him following the move, which has been denounced by the international community.