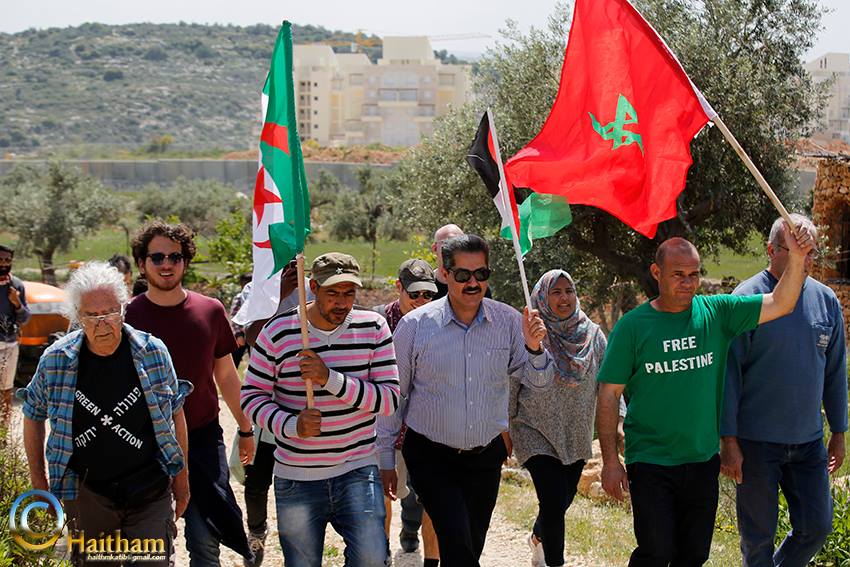 The villagers of Bil’in, in the central part of the West Bank, accompanied by international and Israeli activists, marched Friday from the center of the village to the site of the Annexation Wall, constructed illegally on village land.

They carried Palestinian flags, chanted against the Israeli occupation and for Palestinian national unity. They also called for the release of all political prisoners held by Israel.

As the protesters reached the gate of the Israeli Annexation Wall near the Abu Lemon area of the village, they were met by a squadron of armed Israeli soldiers. Some of the protesters banged on the gate. The soldiers kept their distance, but flew an aerial drone over the protesters, filming their movements and actions.

One Israeli activist burned the Israeli flag at the site of the Wall, in protest of Israeli policy that dehumanizes, brutalizes, humiliates and controls Palestinian lives.

Rateb Abu Rahma, the head of the Popular Committee said “Land Day is a day for unity, steadfastness and resistance, as the Palestinian population continues to struggle against the Israeli occupation and Israel’s illegal colonial activities.”

The Popular Committe Against the Wall in Bil’in called for the international community to support Palestinians’ right to live on their land and achieve independence.